James Dennistoun (1759-1835) moved to Glasgow from the district of Campsie. He ran a mercantile business and set up the Glasgow Bank. He built his home, Golfhill House (demolished in the 1920s), just to the north west of where Golfhill School is now, having purchased the estate in 1814.

'The extent of James Dennistoun of Golfhill's engagement with slavery is as yet unquantified. He had wide interests in textile manufacturing and in the mercantile firm of J & A Dennistoun which traded throughout the world including cotton in New Orleans. Anthony Cooke shows him having shares in the Glasgow West India merchant Buchanan, Steven and Co., and his estate at his death as including £9,710,00 (in a total of £202,856,00) in a mortgage 'over property in Demerara belonging to Frederick Adamson & Co,' (Research from UCL - for further information https://www.ucl.ac.uk/lbs/person/view/2146646285)

After his death in 1835 his eldest son, Alexander (1790-1874), inherited both the house and business which he expanded to offices in New York and Paris and some of his children were born in France (see Eleanor Sellar).

Alexander purchased the adjoining estates of Annfield, Whitehill, Broompark, Reidvale and Craigpark until the whole estate extended to over 200 acres. 4 acres were given to allow Alexandra Park to have an entrance and a frontage on Alexandra Parade.  In 1854 he employed architect, James Salmon (1805-1888), to masterplan the new elegant suburb of Dennistoun. One of the perspectives is the image at the top here and originally none of the plots were to be tenements. The development began with Annfield Place and was followed by Fern Villa (19 Westercraigs) and villas, terraces and communal gardens which now form the Conservation Area of Dennistoun. However competition from the south and west of the city soon required a change to the plans and by 1870s the remainder of the estates which form Dennistoun were developed with tenement buildings, schools and churches and many of the streets are named after this Dennistoun family. 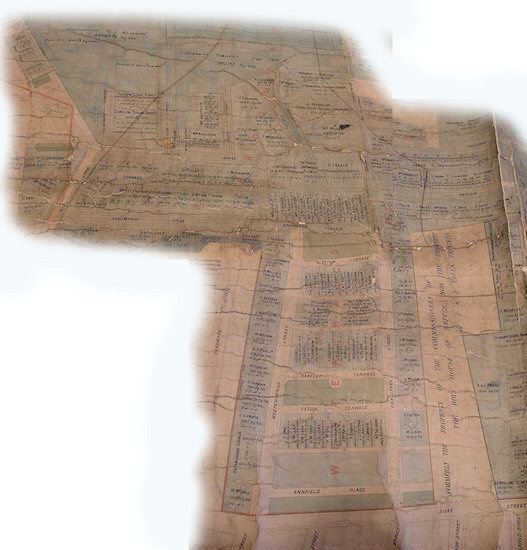