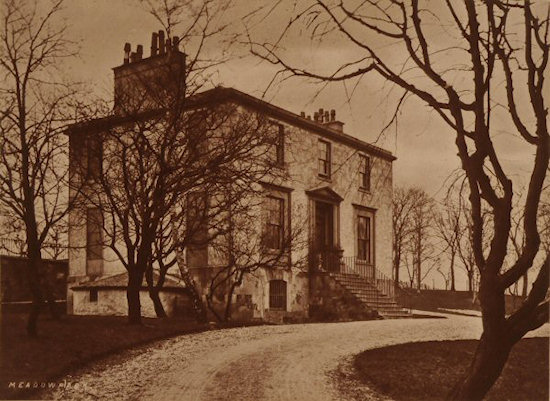 The lands of Meadow Park lay on the north side of Eastern Duke Street at Drygate Toll Bar, and stretched also along the west side of the road to Cumbernauld and Stirling. Anciently they formed part of Easter Craigs but were subsequently included under the name of Whitehill. The property was purchased in 1804 from Mr Grahame of Whitehill by Mr James Carrick a merchant in Glasgow, who built Meadow Park house (above).  About 8 acres of land were included in the purchase and the whole enclosed around the mansion. There was a large walled garden behind with gateway and lodge.

Mr Carrick lived at Meadow Park until his death 15th August 1814. In the following May it was sold by his three sons, James, Alexander and Robert, merchants in Glasgow to James Young, a retired West India merchant. He died there in 1827 and the property was then sold to Mr John Reid of Annfield and Whitehill and, after his death in 1851, sold to Alexander H Dennistoun who incorporated the estate into his rapidly increasing suburb of Dennistoun. There is of course a street named Meadowpark Street.